You are here: Home / Teaching in fun ways / Mom how was the Earth born?
Warning: Use of undefined constant linklove - assumed 'linklove' (this will throw an Error in a future version of PHP) in /home/customer/www/madhuriesingh.com/public_html/superindiankid/wp-content/plugins/facebook-comments-plugin/class-frontend.php on line 99 Before the Big Bang, there is assumed to be a mass which had all the energies you can think of. The gravitational force, the electromagnetic force, the atomic forces, the nuclear forces. When the Big Bang happened, the gigantic mass burst into smaller masses.


Then began the cycle of masses colliding with each other either to create bigger masses   and the then to disintegrate into smaller masses.

This process went on and is still going on in the universe. With gravity being the really major force playing GOD’s role! Yes I would say if there is GOD, it’s name is Gravity.

It was the Gravity squeezing clouds of dust (masses) and gas (hydrogen). This caused pressure to rise and then followed by the increase in the heat violently within the smaller pockets of the universe. These small pockets are today known as various galaxies that had an immense gravity holding number of masses of different sizes.

Then when the temperature rose to 18million degrees Fahrenheit, Helium is born and the first few stars were born. And the God (Gravity), said, let there be lights everywhere ! 6 billion years ago.

So for millions of years there were only billions of stars yet no planets.

So how did were these planets born?

The (Gravity) God was again creating something within the stars. The pressure, temperature and Gravity fused hydrogen into helium, helium into lithium and 25 most common elements God needed to make a planet were formed.

A few of the most important of these 25 were carbon, nitrogen, iron, hydrogen and helium were the basic elements needed to make many more elements that we know of today.

So what did the God do?

Well the Gravity God reversed its action within the stars and caused the stars to Explode! Yes they are called as Supernovas.

These explosions fused the existing 25 elements into more heavier element like uranium, gold, copper and all the other elements we know of. No wonder all these are so precious, because they are a token of reminder of the supernovas and are billions of years old!

( I am thinking …So there are many newer elements that are being formed somewhere far away from the earth ? But not reaching us?)

Then after 4.5 billion years after the big bang, a new star, our SUN is born.

It takes up 99.9% of the masses in our galaxy leaving the rest 0.1% to form the planets including our Earth 5 billion years ago.

The earth was smaller then and it’s rotation was only for 6 hours around our Sun.

Then again the God, the gravity starts to settle heavier elements in the core of the earth, the lighter ones remained on the top surface.

The earth is cooling.

Then 4.5 billion years ago another mass of similar size like our earth, collides into the earth!

And the Moon is born out of the impact. The Gravity God keeps the Moon close to the earth, but the Moon slows down the speed of the earth’s rotation to 24 hours.

The impact tilts the Earth at an angle.

This tilting causes changes in the atmosphere of the earth.

And this tilt caused season is what caused life on Earth.

It’s hot on Earth with lava on top boiling away.

Steam from the boiling mass goes up into the atmosphere. Just like it’s still happening on the Mars.

But there was something needed to bring this steam back on the earth. What was it?

Because the earth slowed down, it also got tilted that caused the steam to be caught by the God (Gravity) close to the earth, unlike Mars where it does not have the right combination of speed, tilt, gravity and mass. Ain’t  we  lucky ? 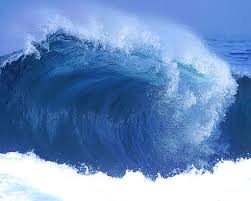 This rain pours and oceans are born.

But still there is no Oxygen!